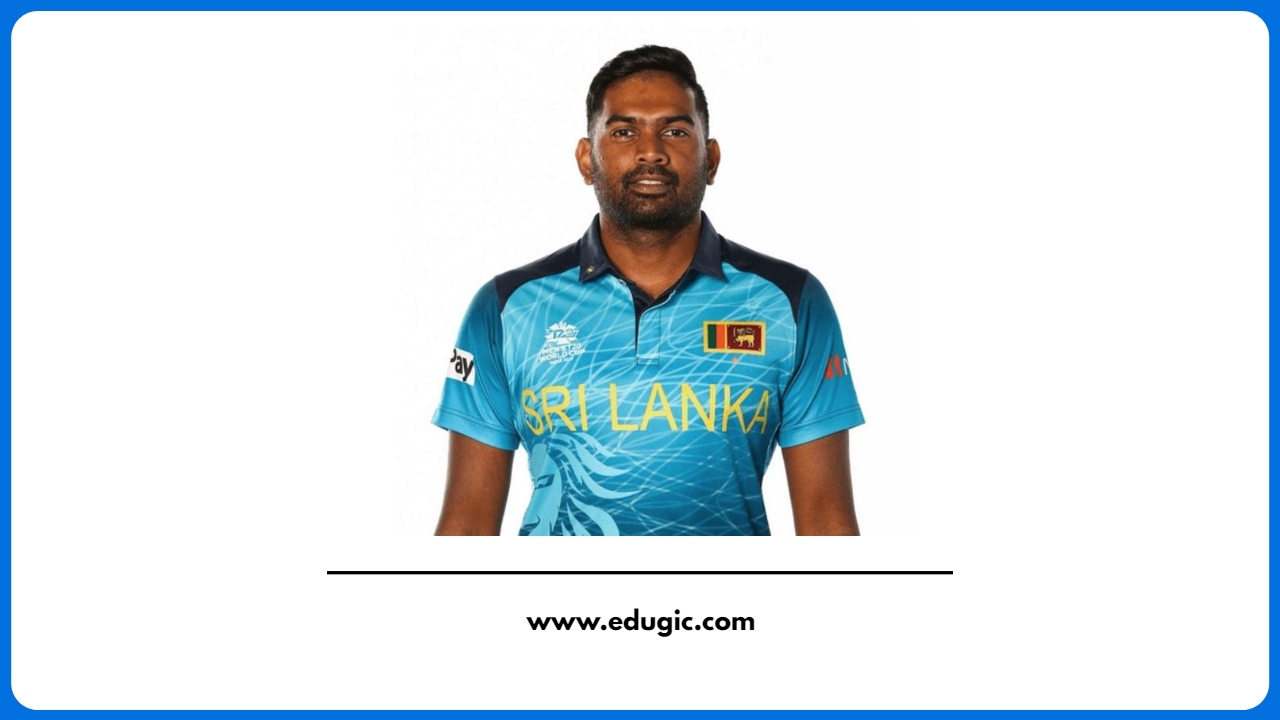 Bhanuka Rajapaksa is a professional Sri Lankan cricketer, who is known for playing limited over internationals for the Sri Lanka national cricket team.

Pramod Bhanuka Bandara Rajapaksa was born on Thursday, 24 October 1991 (age 30 years; as of 2021) in Colombo, Sri Lanka. His zodiac sign is Scorpio. Although Bhanuka was into swimming since childhood, he had to quit the sport when he was diagnosed with the life-threatening illness Meningitis. Thereafter, he decided to pursue a profession in cricket. In an interview, he recalled how he started playing cricket and said,

I was down with meningitis, a brain affecting disease and doctors advised me not to dive. So I took up to cricket.”

While pursuing his schooling at Royal College, Colombo, he started playing cricket, and he represented his school team.

Not much information is available about his parents and siblings.

On 5 April 2021, Bhanuka Rajapaksa got married to Sandrine Pereira in a Catholic wedding ceremony in a church.

In 2009, Bhanuka made his T20 debut representing the domestic team Schools Invitation XI. In the same year, he made his first-class debut for the Sinhalese Sports Club. Later, he advanced into the Sri Lanka Under-19 team and represented his country during the 2009 tour of Australia. In the second ODI during the Sri Lanka Under-19s tour of Australia, he amassed 154 runs in 111 balls, ending the series as the leading run-getter. Thereafter, he was selected for the 2010 Under-19 Cricket World Cup, held in New Zealand, in which he finished as the leading run-scorer for Sri Lanka with 253 runs.

He was in the team Kandy during the 2018 SLC T20 League. Kandy finished as a tie in the third match against Colombo after which the teams went through a Super Over to determine the winner. As the match again tied following the Super Over, Colombo was declared the eventual winner, as they had scored the most boundaries. In the 2018 Super Provincial One Day Tournament, he represented Galle’s squad, which won the tournament after beating Colombo by 75 runs in the final. He played for the team Dambulla in the 2019 Super Provincial One Day Tournament. After being a part of the team Galle Gladiators in the 2020 Lanka Premier League (LPL), he represented the SLC Greys team in the 2021 SLC Invitational T20 League; SLC Greys won the tournament beating SLC Reds by 42 runs. He played for the team Galle Gladiators in the 2021 Lanka Premier League; Galle Gladiators was defeated by Jaffna Kings by a margin of 23 runs in the final. At the IPL 2022 mega-auction, Bhanuka Rajapaksa was signed by the franchise team Punjab Kings for Rs 50 lakhs. He has been a consistent performer in Sri Lanka’s domestic circuit and has also played for the following teams:

On 5 October 2019, Bhanuka made his T20I debut for Sri Lanka against Pakistan at Gaddafi Stadium. Sri Lanka won the series and Bhanuka gained popularity for his big-hitting prowess in the second T20I in which he become the “Player of the match,” scoring 77 runs off 48 balls. On 18 July 2021, Bhanuka Rajapaksa made his ODI debut for Sri Lanka against India at R. Premadasa International Cricket Stadium. In July 2021, he was named in Sri Lanka’s squad to play three One Day International (ODI) and three Twenty20 International (T20I) matches when the Indian cricket team toured Sri Lanka. While India won the ODI series, the T20I series was won by Sri Lanka. It was the first time that Sri Lanka had won a T20I series against India. In September 2021, he became a part of Sri Lanka’s T20 World Cup squad. On 5 January 2022, Rajapaksa announced his international retirement via a letter written to the SLC, which stated that he had decided after considering some family obligations. However, when the Sri Lankan Sports Minister Namal Rajapaksa requested Bhanuka to cancel his retirement, Bhanuka withdrew his retirement letter on 13 January 2022.

In 2021, Rajapaksa levelled some serious allegations against Sri Lanka Cricket (SLC) and alleged that he was mistreated by the authorities due to his under-par fitness level. After being overlooked for the tours of the United Kingdom and West Indies, Rajapaksa expressed his disappointment in a YouTube interview in which he insisted that the on-field performances of players should be prioritized for the selection of players instead of the fitness level of the players. Responding to Rajapaksa’s claims, Sri Lanka head coach Mickey Arthur said that Bhanuka had failed in the skinfold tests required to qualify to play in international cricket matches and the management wanted to have fit cricketers in the national squad. Calling Rajapaksa a “comfort zone cricketer,” Arthur alleged that Rajapaksa loved chocolates and therefore he did not follow the diet he was provided with. The clash between Rajapaksa and Arthur led to Rajapaksa’s suspended ban from all forms of cricket for one year, along with a fine of $5,000, by the SLC for breach of contract and for not obtaining the required permission from SLC to give media interviews.