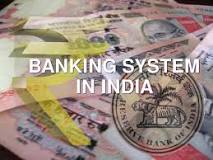 All the banks of India work under the direction and control of the Reserve Bank of India (RBI). The banking system has made money transactions easy and secure.

Payment or transfer of any amount can be done easily and quickly using Cheque, Bank Draft, Internet Baking etc. We can easily withdraw money from our account through Automatic Teller Machine (ATM).

We can deposit our savings in the account. Here our money is safe, as well as interest is also available on it. Our small savings like this get accumulated in the bank and become a huge amount of money.

The bank lends this amount to the people who want to establish their employment as well as industries and business institutions. This money is used in many development works.

n this way, banks play a huge role in development works by giving loans for employment and industry businesses. While information technology has made banking services universally accessible,

On the other hand, some people cheat bank account holders by misusing this technique. Therefore, do not use internet banking and ATM machine in the presence of any other person. Do not share your password / pin number with anyone.

What is bank What Is Bank Information In Hindi

A bank is an institution that deals in money and credit. The bank accepts the deposits of the people and provides the facility of lending and deduction. Apart from this, keeping in mind the convenience of the customers, it also does agent related work on their behalf.

Today, internet banking can operate its account from any place and 24 hours banking means that the customer can withdraw money from ATM machine anytime in 24 hours, and deposit money.

Hindi meaning of bank According to the Indian Banking Act 1949, “Bank is a company that carries on the business of banking” Banking means depositing money from the public for the purpose of giving loans or investments, which will be payable on demand and payable by cheque, draft or can be extracted in any other way.

Types and history of banking system in India

The credit goes to the British for establishing the banking system in India. Firstly, in 1770, Bank of Hindustan was established in Calcutta by Alexander and Company. It was the first bank of modern India.

After this, East India Company took the responsibility of establishing banks for the development of its business. With the establishment of the Bank of Bengal in 1806, lakhs of banks were opened simultaneously in different cities.

Imperial Bank of India and Punjab National Bank were the first Indian banks to be started. After the Indian independence movement of 1857, all the small banks were merged with the Indian Imperial Bank and its ownership was taken over by the British Government.

After independence, its name was changed to State Bank of India. This is the first and only public bank in India, which was established in 1955.

After independence, there were many major reforms in the banking system in India, as a result of which today any person can easily open his account in the bank, do transactions or even take a loan from the bank if needed. A common man can take advantage of the following bank services in India.