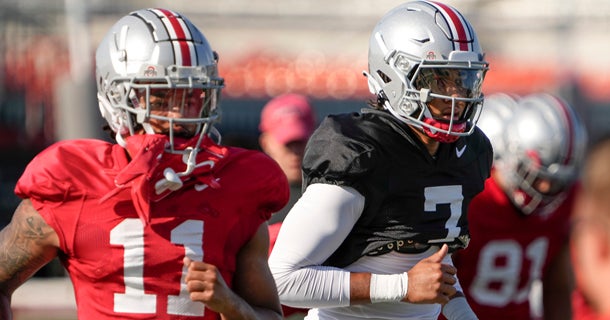 Bucknuts.com’s Steve Helwagen hosted his weekly Chat on Monday night on The Front Row message board. Check out the transcript below.(*12*)&#(*25*);

Helwagen- Yes, I would think so. The limited chances we had to watch them they were working hard and with a purpose. We’ve done a ton of interviews with players and coaches and everything sounds very positive. That’s all we can go on. They are conveying that the defense is better, so you have to take them at their word. They would know and it will be proven true or false beginning on Saturday.(*12*)&#(*25*);

Jurkzeuss Zarknoktu @jurkzeuss (via Twitter)- Should ryan day have nudged larry johnson into a non-coaching position and replaced him with another coach that could be around longer? don’t really believe lj when he says he’ll be around for a while and i can’t imagine top recruits believe it either(*12*)&#(*25*);

Helwagen- No, I don’t believe that. Larry Johnson is one of the best assistant coaches I’ve seen in my time at Ohio State. He is a very good recruiter and developer. Let’s see how the line comes together this year, primarily if everybody stays healthy.(*12*)&#(*25*);

Read Also:   Timpackchaser Twitter Video – She Got Caught Cheating But Had No Shame In Her Game The Talks Today

ButlerBuck- If Nebraska could set the DeLorean clock back to the year before they decided to join the Big 10 and go warn themselves to stay in the Big 12, do you think they would do it? How difficult is it going to be for them to find their way back to being a consistent top 15 team?(*12*)&#(*25*);

Helwagen- No because the money situation dictates everything. They’d be left in a lame duck Big 12 without Texas and Oklahoma. They have to get players to want to go there and make it attractive again for the best players. They should be able to pull from every state in the country. It is literally a 3 hour flight from almost everywhere.(*12*)&#(*25*);

Frost just doesn’t seem like a charismatic builder. He is trying to live off what he did there 25 years ago and just coach football. That ain’t getting it done. He’s got about five days to get this figured out or he’s going to be out of a job by Oct. 1. They can’t let this fester and go through another bad recruiting cycle.(*12*)&#(*25*);