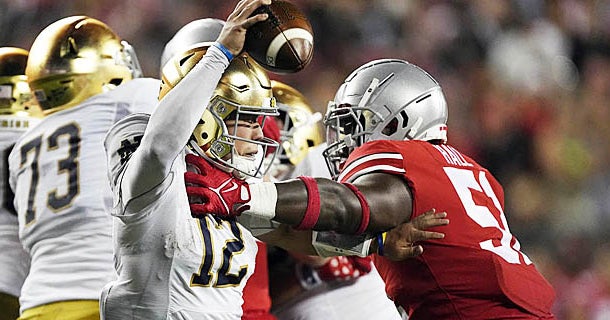 We have photos and videos from Ohio State’s 21-10 win over Notre Dame on Saturday night at Ohio Stadium. Thanks to Dan Harler for his help with this gallery.

This was the most anticipated season opener at Ohio State in years as the Buckeyes played in their first top-five match-up in an opening game in school history.

The Buckeyes had to come back from a 10-7 halftime deficit. The OSU defense held the ND offense scoreless in the second half, while the OSU offense came alive with a pair of touchdown drives to secure the win.

This was just the seventh all-time meeting between Ohio State and Notre Dame and only third time the Fighting Irish have visited the venerable Horseshoe. It also marked the first time Ohio State has ever played a season opener with both teams ranked in the top five nationally. Ohio State took a 5-2 edge in the all-time series with all five wins by double digits.

Quarterback C.J. Stroud ended up 24 of 34 passing for 223 yards and two touchdowns.

WR Jaxon Smith-Njigba only played about one quarter of this game. He took a tough hit to the back of his head and may have also suffered a lower leg injury. OSU was also without injured wide receivers Kamryn Babb and Julian Fleming.

In their stead, rising sophomore Emeka Egbuka had a big coming-out party. He caught nine passes for 90 yards and a touchdown. Xavier Johnson, a former walk-on, came up big with a 24-yard touchdown grab that gave OSU a 14-10 lead late in the third quarter.

Using a revamped offensive line with two new starters and Paris Johnson moving from guard to tackle, it was hoped that the Buckeyes could get back to their roots with a physical running game. The run game struggled until late, although a run-dominated 95-yard touchdown drive that put it away.

TreVeyon Henderson had 15 carries for 91 yards, while Miyan Williams had 14 carries for 84 yards and a touchdown.

The much-maligned Ohio State defense largely held up its end of the bargain. The defense, led by new coordinator Jim Knowles, gave up a handful of big plays. But they turned Notre Dame away time and again and kept the game manageable until the OSU offense finally awoke from its slumber.

Buckeyes overcome adversity to get past Notre Dame

Prospects react to environment at Horseshoe