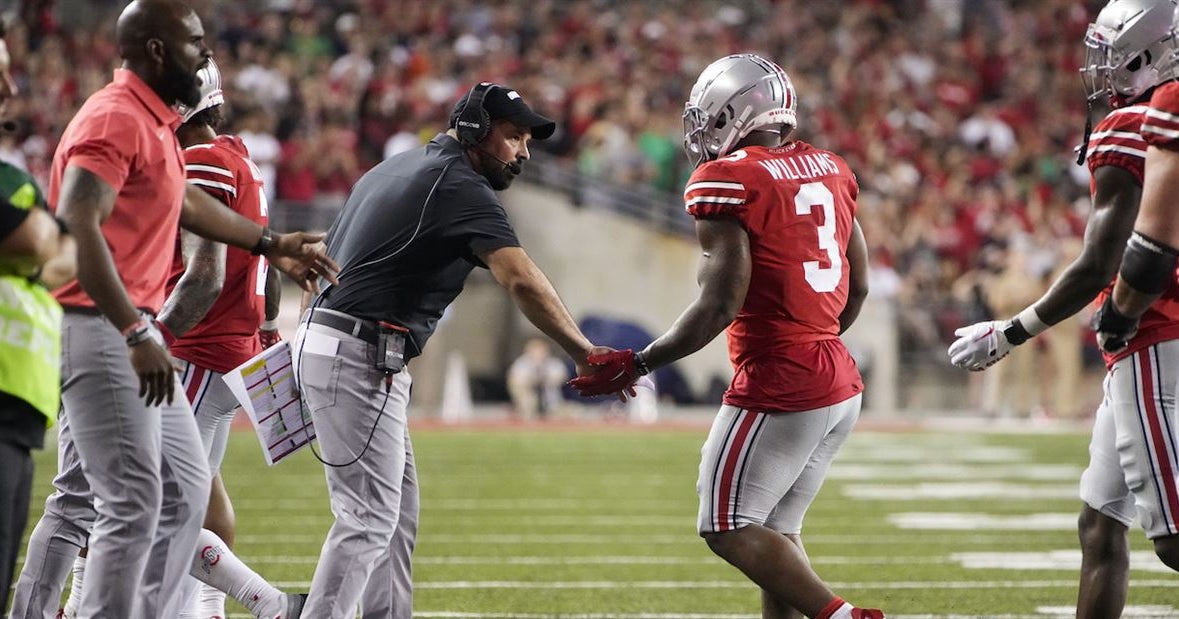 It’s almost like Ohio State planned for its opening game against No. 5 Notre Dame. While the second-ranked Buckeyes certainly didn’t anticipate being down three of their top six receivers in the opening game and not being able to rely on not their Heisman Trophy candidate quarterback in the first game of the year, the Scarlet and Gray were prepared to handle what came their way.

It wasn’t pretty at times, but Ohio State earned a 21-10 win in front of a raucous crowd of 106,594 at Ohio Stadium on Saturday night. Despite a stop-and-start nature, the Buckeyes managed 395 yards of total offense, a far cry from the 561.2 yards per game the team averaged last season that made the Scarlet and Gray the best statistical offense in the country.

Expected to once again have a top offensive unit, it was strange to see the Buckeyes punt after just four plays to start the game. Order seemed restored on the second drive when the Scarlet and Gray drove 54 yards on four plays and found the endzone to take an early 7-3 lead.

It appeared, after shaking off the cobwebs, Ohio State’s offense had found its groove on the second possession and would go on to lead the team to a win. That was not the case. The Buckeyes went six possessions, including the end of the half, without scoring a point. The third of these drives ended in a missed field goal, something the Scarlet and Gray did just once in 2021.

On that first scoring drive, Ohio State lost one of its top weapons. Junior wide receiver Jaxon Smith-Njigba, who led the Buckeyes in receptions and receiving yards last year and is a Biletnikoff Award candidate this season, landed awkwardly on the sideline after a target. He left the game for several series, eventually making one last effort out of halftime before watching the rest of the game from the sideline.

“Yeah, it was a struggle early on,” Day finally relented. “They’re a good defense. They’ve got a lot of seniors. And when we lost Jaxon, we got a little out of rhythm.”

Gone from the offense was quarterback C.J. Stroud’s favorite target, one with whom he has the most chemistry dating back to their time as freshmen working on the scout team, and his 95 receptions, 1,606 receiving yards and nine touchdowns from a season ago.

“He’s the best receiver in the country and we’ve built a connection, not just on the field but off that helps us on the field,” Stroud said of Smith-Njigba. “So when he was out the game, of course, it affected our team, it affected our offense. But at the end of the day, when you look at it, we got the job done.”

In addition to losing Smith-Njigba early in the game, the Scarlet and Gray were without junior receiver Julian Fleming, a game-time decision who was scratched pregame, and fifth-year senior wideout Kamryn Babb, who suffered a knee “setback” in fall camp. This meant Ohio State went into the top-five matchup without two of the team’s top six receivers and then lost a third. Fortunately, the Buckeyes have recruited the wideout position as well as any other and had alternative options.

Stroud established a quick connection with sophomore Emeka Egbuka, who caught a career-high nine passes for 90 yards and the opening touchdown. While it took some time, sophomore Marvin Harrison Jr. found his footing, finishing with five catches for 56 yards, 35 of which came in the second half. Fifth-year senior Xavier Johnson, a former walk-on who was quietly put on scholarship just over a year ago, became a part of the offense in the second half, hauling in two receptions for 34 yards and catching the game-winning touchdown. Redshirt freshman Jayden Ballard added two catches for 14 yards.

“Jaxon is a phenomenal player and it’s definitely helped having him,” Egbuka said. “But once again, I feel we’re the best wide receiver room in America. So anybody you put on the field is going to be able to execute their plays down to the tee and everyone who stepped on the field tonight played great.”

The Scarlet and Gray also had to rely more on the ground game with a bit of a makeshift passing attack. Fortunately, that too was something Ohio State was prepared for.

While it may not have seemed as such in the first half, where the Buckeyes rushed the ball just 11 times to 17 pass attempts, Day and others talked of being a more balanced attack heading into the year. Leading into the game, the Scarlet and Gray stressed the importance of the run game in a marquee game such as this one.

With the passing attack off-kilter, Ohio State leaned on the run more in the second half, doubling up the number of carries for the running backs from the first. Sophomore TreVeyon Henderson rushed for 91 yards on 15 carries and third-year sophomore Miyan Williams had 14 carries for 84 yards including an impressive, hard-running drive in the fourth quarter that ended with the game-sealing touchdown.

Based on what this Buckeye offense did a year ago, this wasn’t the performance many expected. One of the country’s best passing offenses wasn’t as explosive as normal but showed why the receiving depth is important. A team that struggled to run the ball last year in tough situations did so in the second half, which was a focus of the offseason.

The Scarlet and Gray had to dig deep and find another way to win, which is something this team hoped to be able to do in 2022.

“For us to win the way we did, I couldn’t be any prouder,” Day said. “We lost Jaxon early on, and it was a struggle. Their game plan was to kind of hold onto the ball and control the game and so it wasn’t as many possessions and we missed on a few things early and got off schedule. But to be able to get the run game going in that last quarter, that says a lot about our team.

“If we’re able to run like this, then we can win different ways. And that’s going to help us out down the road.”