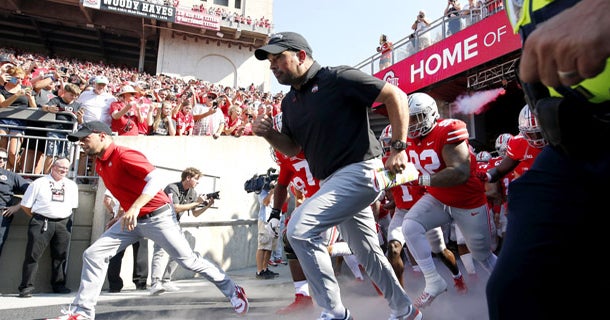 It is hard to tell if there is more excitement surrounding Ohio State’s historic season opener against Notre Dame or for the impending season ahead for the Buckeyes.

Well, the easy answer for that conundrum is “both.” The excitement level has reached a fever pitch on the banks of the Olentangy as Ohio State opens the new season ranked No. 2 nationally and the Buckeyes will face their first-ever match-up of top-five teams in a season opener when they host the fifth-ranked Fighting Irish at Ohio Stadium on Saturday night (7-30 p.m., ABC).

As always on the eve of the opener, I will share my thoughts on Ohio State’s season as well as a record prediction. But I do want to devote some time looking at this first game against Notre Dame. It is just the seventh all-time meeting between these two great college football powerhouses and just the third time the Irish will play a game at Ohio Stadium.

The last time anybody saw Ohio State play a game was on Jan. 1 in the Rose Bowl, where the Buckeyes had to battle back from four different 14-point deficits to defeat Utah 48-45. The architects of that huge comeback win were quarterback C.J. Stroud and wide receiver Jaxon Smith-Njigba. Stroud impressed the college football world by throwing for 573 yards and six touchdowns, while Smith-Njigba caught 15 passes for 347 yards and three scores.

It is no wonder that both of them have been listed on preseason All-American lists and are – along with OSU running back TreVeyon Henderson – considered as candidates for the 2022 Heisman Trophy.

And it is their return to Ohio State that has everybody so bullish on these Buckeyes going into the new season. To that end, Ohio State has been installed as a prohibitive 17-point favorite to dismantle Notre Dame in the opener.

A No. 2 ranking and a 17-point spread against the No. 5 team? And the game is being played inside the friendly confines of the Horseshoe? (As an aside, the venerable, 100-year-old stadium has rarely looked better.)

This sounds like the set-up of all set-ups. Mix in the fact that Ohio State has struggled in marquee nonconference games against Power Five opponents like Texas, USC, Virginia Tech, Oklahoma and Oregon and you understand that the Buckeyes can’t take anything for granted.

Ohio State was the No. 4-ranked team in the preseason last year. But losses to Oregon and Michigan derailed the Buckeyes from their dreams of a fifth straight Big Ten championship and a third straight College Football Playoff berth. Yes, winning the Rose Bowl was nice. But 11-2 was not what anybody in the Scarlet and Gray had expected or signed up for.

That’s why Ryan Day, beginning his fourth full season as the Ohio State head coach, said complacency will not be an issue for his heavily favored team – either for this game or for the season ahead.

“I think coming off of last year, there’s no big heads,” Day said. “I mean, this team is hungry. (The preseason) has been gritty. And we’ve got to go win this first game, and then they know that.

“So there’s no big heads on this team. Right now, we’ve got a lot to prove.”

Smith-Njigba, speaking earlier this week, said the players have a keen awareness of what’s at stake on Saturday night.

The enormity of this moment is not lost on Day.

“Just getting Notre Dame and Ohio State together, it’s the first game of the year … all the things combined, what a great opportunity,” the coach said. “That’s what college football is all about, bringing people back and making it special.

“This is about our players. I try to remind guys that every year when we play in environments like this, and that’s the opportunity that is there. We are working really hard to make sure that we’re prepared for this thing.”

Still, all of the hype for this game and the vast history surrounding the two programs will take a back seat once the ball is kicked off at 7-44 p.m. Saturday night. That’s when blocking and tackling – and, based on what we saw Thursday night, about 40 replay review stoppages for targeting – will take center stage.

Day said the opener creates its own set of circumstances, especially with new defensive coordinators on both side of this match-up (Jim Knowles for Ohio State and Al Golden for Notre Dame).

“Every year, it’s the same story,” Day said. “It’s a challenge to figure out what changes and adaptions have been made based on personnel from each side. In the NFL, you’re drafting players to play in a system.

“But in college when you have new coordinators move in and out and when you have different players moving in and out with graduation and different things, it changes. You try to do the best you can to project that. But then, in game, you have to have a good contingency plan that you can move to and quickly and adapt and be light on your feet.”