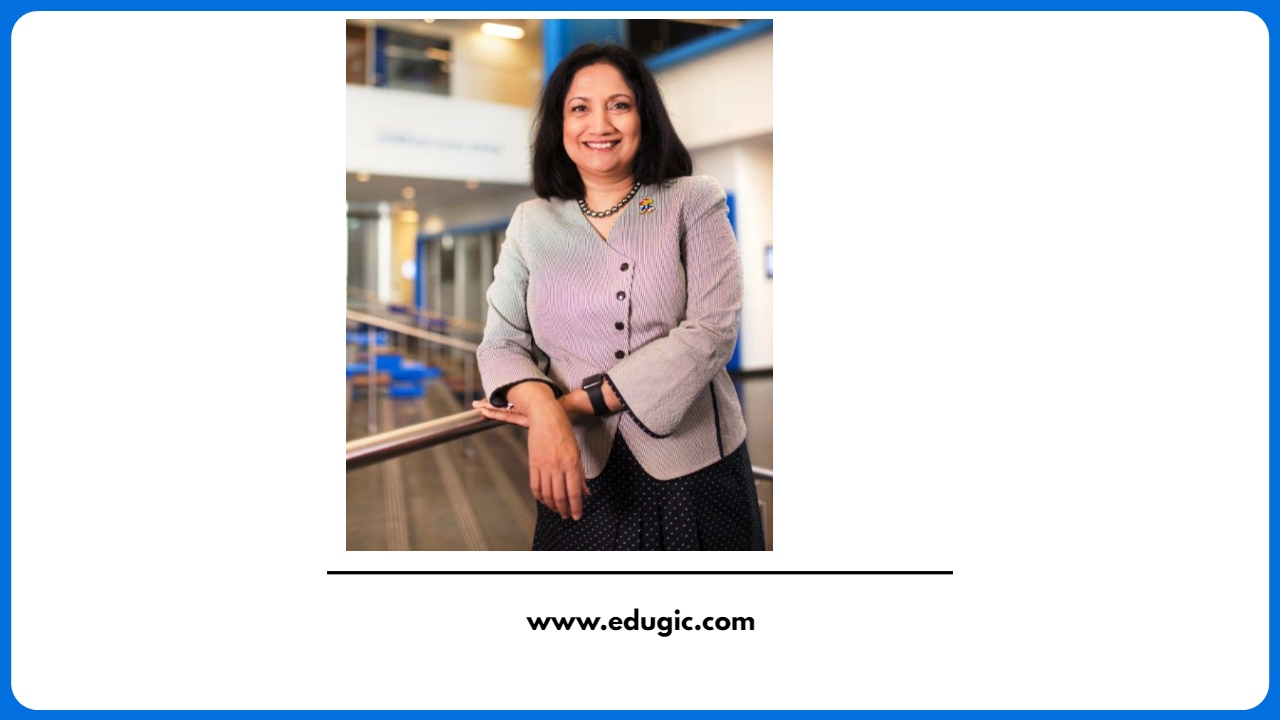 Neeli Bendapudi is an American professor of the Indian-origin. In December 2021, she created history by being named the first female and first person of colour to earn the title of the president of America’s prestigious Pennsylvania State University, which she will hold in the spring of 2022. Currently, Neeli is the 18th president of the University of Louisville, which also makes her the first female and non-white person to sit at the position.

Neeli Bendapudi was born in 1963 (age 58 years; as of 2021) in Visakhapatnam, Andhra Pradesh, India. She earned her bachelor’s degree in English in 1983 and MBA degree in 1985, both from the Andhra University in India. Next year, Bendapudi moved to the U. S. to pursue her doctorate in marketing from the University of Kansas, which she completed in 1994.

Her father, late Ramesh Dutta, was in the Kansas Jayhawks men’s basketball program of the University of Kansas.

Neeli Bendapudi with her parents

Neeli Bendapudi with her sisters when she was a kid

On 8 February 1984, Neeli got married to Venkat Bendapudi, who is a senior lecturer in Kansas University’s School of Business.

Neeli Bendapudi with her partner

They have a daughter, Sirisha Bendapudi, who got married to Kyle Ladd in 2015.

Dr Bendapudi has been an Assistant Marketing Professor at Texas A&M University from 1994 to 1996 and Assistant Marketing Professor at Ohio State University from 1996-2002. She was then promoted to Associate Professor at Ohio State University before assuming full professorship from 2008 to 2011. She has also served as chief customer officer and executive vice president of The Huntington National Bank, which was a top-30 US bank at the time in 2007-2008. She also has consulted for some of the world’s largest companies and organisations including AIG, Proctor & Gamble, and the US Army.

In 2011, the Indian-origin professor returned to her alma mater, KU, and served as the dean and H.D. Price Professor of Business at the KU School of Business for five years. In July 2016, Bendapudi formally began her job as the Provost and Executive Vice-Chancellor at the U of K, where she served till 2018.

In May 2018, Bendapudi wrote history by becoming the first female and person of colour to be appointed the 18th president of the University of Louisville by its Board of Trustees. She succeeded James Ramsey, who resigned in 2016 after a controversy. Under her presidency, the University enrolled its largest and most diverse freshman class, improved four-year graduation rates, reached record enrollment levels, and increased annual sponsored research by nearly 80%. During her tenure, U of L became a national leader in diversity, equity and inclusion, and it was also named as one of only three universities among the top 101 public universities to receive an “A” for the creation of access for African American and Latinx students.

Dr Neeli Bendapudi, on 10 December 2021, was appointed the 19th president of the prestigious Pennsylvania State University. She will take over after the current president Eric Barron will retire, which is sometime before 1 July 2022. The decision by taken by Penn State’s Board of Trustees unanimously. In her acceptance speech, Bendapudi said,

I do recognize the appointment’s symbolic value. But to me, what I truly hope it does is that it inspires others to pursue the highest office in their chosen field, no matter who they are… It’s a day for tremendous joy for me, but it’s also one for realism. I recognize that I – that we have a lot of work to do as the higher qualification landscape continues to shift.”

On July 13, 2018, Bendapudi immediately responded to Papa John’s Pizza founder John Schnatter’s use of a racial slur, who admitted to using the n-word at a conference call, by announcing that Schnatter’s name would be removed from the University of Louisville’s football stadium’s name. Within 48 hours, Neeli officially changed the name of Papa John’s Cardinal Stadium to “Cardinal Stadium,” effective immediately. She wrote in a formal statement,

These comments were hurtful and unacceptable, and they do not reflect the values of our university. By taking this action, we renew our community’s commitment to speaking up when it matters, doing what is right, and coming together as one team – our Cardinal family – to heal and move forward. The brightest days for this university are still ahead.”

Called Out For Not Being Transparent

In December 2021, a media report called out Neeli’s hypocrisy of not being transparent in her official decisions. According to the report,

On consecutive days, the president of the University of Louisville [Neeli Bendspudi] declined to explain how a board meeting met the legal requirements to be conducted behind closed doors and why athletic director Vince Tyra’s non-compete clause was waived to facilitate his taking a job with an Atlantic Coast Conference competitor.”

The post criticised her because earlier at the time of her appointment as the president, Bendapudi had said in her speech that she “hoped to set the tone that she had to be transparent.”