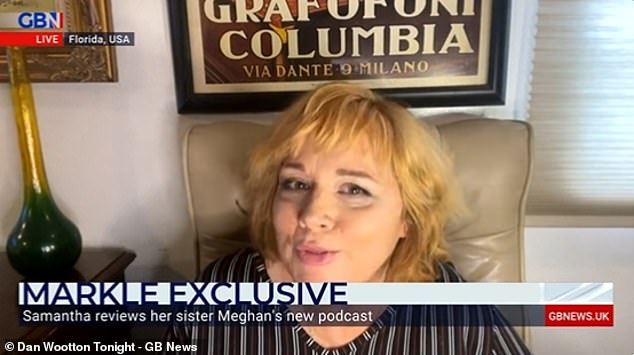 Meghan Markle’s half-sister has slammed the Duchess of Sussex for her “loud” claims of victimhood and for treating Prince Harry in a “disrespectful and abusive manner” on her new podcast.

Samantha Markle responded with a disbelieving eye roll as Meghan’s “weird and breezy” podcast interview with tennis legend Serena Williams was played for her on Dan Wootton Tonight.

The podcast was the first episode of Archetypes, a new Spotify series in which Meghan plans to “investigate labels that are trying to hold women back”.

But Samantha accused the Duchess of being “quite haughty” in her claim that she was able “to grapple with issues of womanhood and suffering because she attended Immaculate Heart School, where she was empowered by the nuns to to be independent women”. .

“But who paid for that?” Samantha asked. “It was all my father. Let’s face it, we didn’t travel in a vacuum. There are others who help us along the way, who support us and who pay for everything that the platform that our father was gives us.’

She went on to accuse Meghan of “self-aggrandizement” and said her claims about ambitious women could be a “projection”.

“Most women are raised to be ambitious,” she said. “But I think there’s been a lot of public scrutiny about how some climb the ladder.”

Meghan’s half-sister also suggested that Prince Harry has had to “play second fiddle” since the couple’s wedding in 2018.

Meghan’s half-sister Samantha Markle described the new podcast as “weird and breathless” and “lots of female talk and purring.”

The Duke appeared on the podcast, poked his head in the door to say hello, then called Serena Williams’ hairstylist a “vibe” before disappearing again.

When asked by Dan Wootton if she felt Meghan had “emasculated” Prince Harry, Samantha replied, “Harry seems to be playing second fiddle. It didn’t hurt to use the title and royal wedding as a stepping stone, but after the wedding was over, it felt like Harry was being overshadowed.

“Why include him at all if he’s not there? It just seemed very off-putting and I felt insulted – instead of including him and letting them both talk about what’s important in their lives right now.

“It was really just a lot of female nonsense and purring.”

Dan Wootton asked Samantha Markle if she felt Meghan had “emasculated” Prince Harry, to which she replied, “After the wedding, it feels like Harry is in the shadows.”

The podcast was also criticized for Meghan’s comments that she was “shaken” and couldn’t believe she had to proceed with royal engagements after a “fire” broke out in the room where her son Archie was supposed to sleep in South Africa.

Archie, then four months old, was not in the room in Cape Town when a heater started smoking, but Meghan said she was “in tears” and accused the tour guides of focusing on “how it looks rather than how it feels.” .

Royal commentator Richard Fitzwilliams told MailOnline: “Fortunately no one was injured and whilst it must have been very upsetting there was certainly no alternative but to continue with the itinerary. It would have been so disappointing for so many if they hadn’t.

She ended the interview by reiterating her view that Meghan didn’t give her father enough credit for helping her get the platform she has now.

Read Also:   DJ Snake- Whenever I go to India, I make sure to find some music and artists

She said: “I think she misses the point. The awards belong to dad, her parents, her friends, her family, those who love and support her and got her to where she is now.

Archetypes describes itself as “a refreshing and dynamic new podcast where Meghan, Duchess of Sussex delves into the labels trying to hold women back”.

She ended this week’s episode by announcing that singer Mariah Carey will be her next guest.