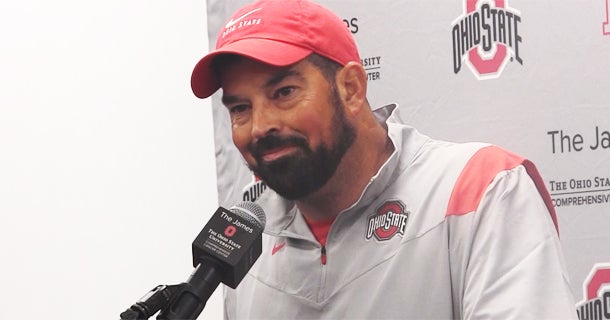 The No. 2 Buckeyes are as healthy as they’ve been entering a season in recent memory. They did lose third-string running back Evan Pryor to a season-ending injury in camp, but other than that, OSU enters the Notre Dame showdown healthy.

“That’s the balance that you try and find is how do you make your team tougher and more physical and callus and hard, but then also still making sure they are healthy and ready to go in this first game,” Day said. (*4*)

The No. 5 Fighting Irish have a good and deep defensive line, led by projected first-round NFL draft pick DE Isaiah Foskey. Day was asked if Notre Dame’s defensive line versus Ohio State’s offensive line is the key to the matchup.

Day said his expectation is for the Buckeyes to have a top-10 defense this season. They were 59th nationally last season, playing against a schedule with very few good offensive teams on it. Day was asked when he will know whether he “got it right” with the hiring of defensive coordinator Jim Knowles.

“Well, I think time will tell,” he said. “But it’s been great to see just during the scrimmages how they’ve operated and some of the things that they have done. But it’s the communication. It’s the understanding of how a team is trying to attack them. Winning the line of scrimmage. Getting off the field on third down. Doing a great job in the red zone.

Ohio State is hoping to have the services of kicker Parker Lewis who transferred from USC this offseason. However, there is a snafu with academic credits transferring from USC to OSU.

“No, there is no update on that,” Day said when asked.

Noah Ruggles returns as the Buckeyes’ starting kicker this year, although Lewis was likely going to be the kickoff specialist.

For the full 10 minutes of Day’s video Q&A with reporters, watch the embed directly above this sentence.