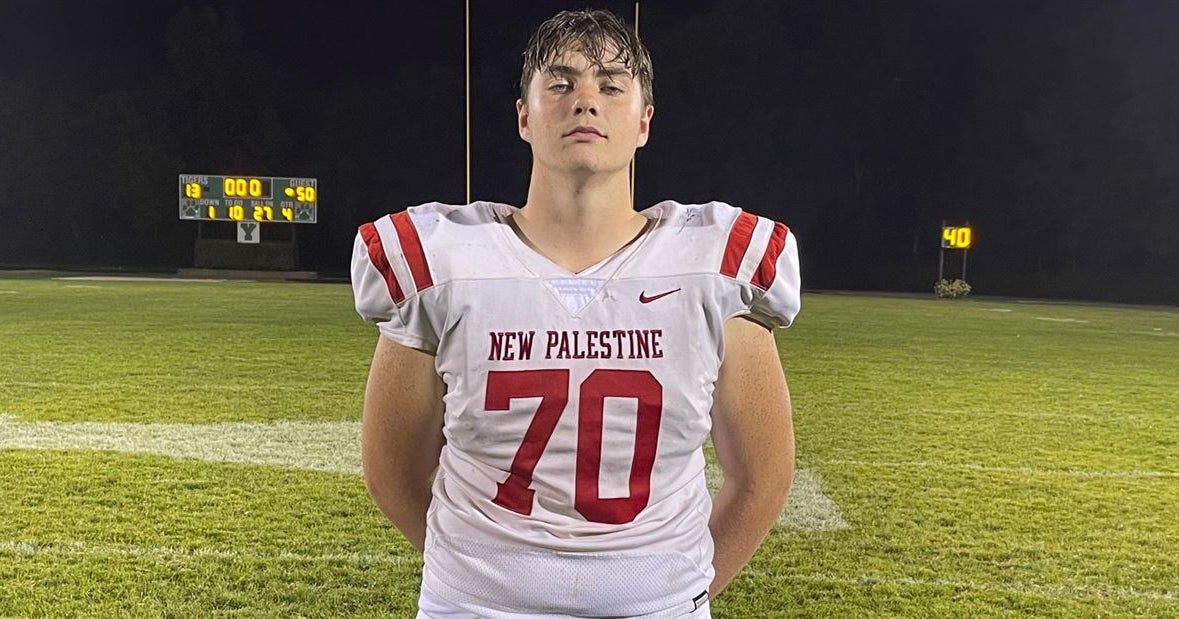 YORKTOWN, Ind. – Shortly after helping pave the way to another New Palestine (Ind.) High blowout victory, this time a 50-13 romp over host Yorktown (Ind.) High, Top247 2024 offensive lineman Ian Moore took a minute to think about the fact that he almost gave up football as a freshman.

Back then, he was at a much smaller school, Carroll Consolidated High in little Flora, Ind., and it didn’t seem like he’d ever get much traction on the gridiron.

The point was the bruising big man with good feet better stick to football. Moore is glad he did. His family ultimately moved to New Palestine, 20 minutes away from downtown Indianapolis, where both his parents could be closer to their work. It happened to also workout he was joining one of the best football programs in the Midwest headed up by one of the best coaches in the country in Kyle Ralph who played offensive line at North Carolina back in his day.

“It’s crazy, watching my film from last year to this year, thanks to Coach Ralph and all the coaches I work with,” Moore said. “To see where I’m at now, if I was still in those shoes (at Carroll), I couldn’t imagine.”

Now Moore is one of the most sought-after offensive linemen in the 2024 class. He’ll visit Ohio State on Saturday night for the Buckeyes season opener against Notre Dame.

“I’ve been mostly pursued by Ohio State and Wisconsin, we’re talking pretty much four to five times a week and they’re heavily into me.”

“I’m still trying to figure things out and figure what I’m trying to look for in a school,” Moore said.

With that being said, no doubt the Buckeyes and Badgers have made quite the impression.

“Definitely Coach (Justin) Frye,” he said of Ohio State. “He’s an Indiana guy. We have that in common. He’s a great person, great coach. I had the honor of going to camp with him. Great coach.”

“Wisconsin, just an amazing place. If you’ve been to Madison it’s beautiful. Obviously the culture of Wisconsin offensive linemen is crazy.”

The 295-pound Moore is tabbed by the Top247 as the No. 1 recruit in Indiana and No. 4 interior offensive lineman in the country.

Moore aims to study kinesiology and says that will be an important part of his college decision. As he walked off the field at Yorktown Friday night, it blows him away how quickly things have developed for him over the last two years.