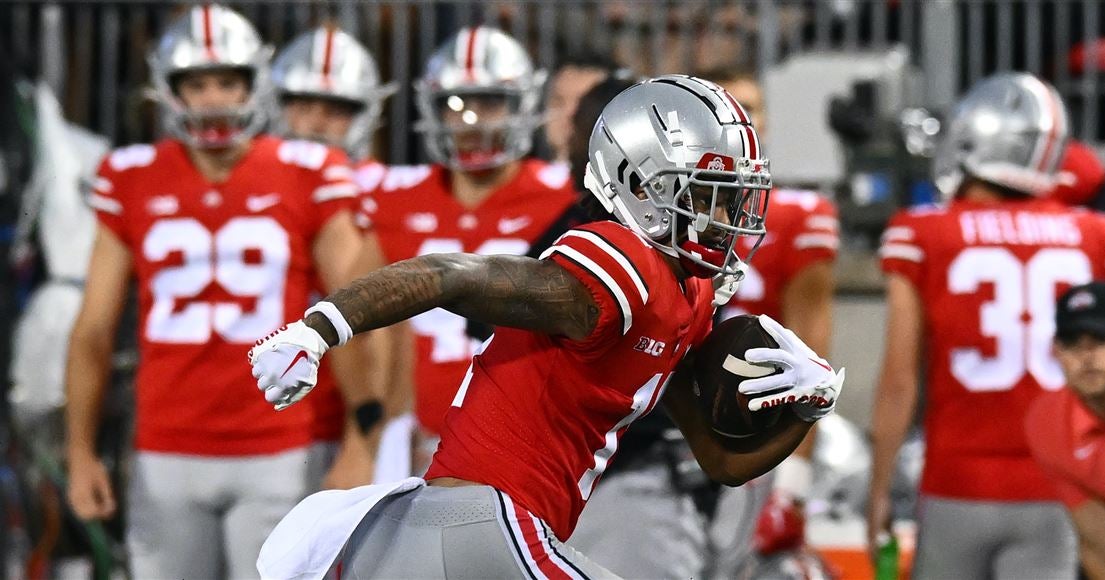 Ohio State football head coach Ryan Day said he hopes to have wide receivers Jaxon Smith-Njigba and Julian Fleming both back in action for the Buckeyes’ Week 2 home game against Arkansas State following injuries to the pair of pass-catchers. Fleming did not see action during Ohio State’s 21-10 Week 1 victory after being listed as a game-time decision, while Smith-Njigba suffered an apparent left leg injury early and was limited the remainder of the night.

Smith-Njigba’s injury came in the first quarter when he landed awkwardly on his left leg while being tackled by a Notre Dame defender. He re-entered the game briefly twice after missing several series immediately after the hit, but was a non-factor for the Buckeyes the remainder of the way and was sidelined for the majority of the second half. Smith-Njigba had just two catches in the victory, totaling three yards.

Smith-Njigba joined Ohio State in 2020 as a 5-star signee out of Rockwall (Texas) High School, but it wasn’t until 2021 that he enjoyed a true breakout. After catching for 10 passes for 49 total yards and a touchdown during the Buckeyes’ COVID-19 shortened season in 2020, Smith broke out for a 1,000-yard receiving season last fall, ending the year with 1,606 receiving yards and 9 touchdown receptions It says something that, even as Smith-Njigba shared snaps a year ago with Garrett Wilson and Chris Olave at Ohio State, he was still considered to be the group’s biggest talents, and his targets are expected to increase in 2022 with Wilson and Olave now off to the NFL.

As for Fleming, he had 12 caches for 86 yards and a touchdown during the 2021 campaign over eight appearances. He previously appeared in four games for Ohio State during the 2020 campaign, catching seven passes for 76 yards total. Fleming was also a member of Ohio State’s 2020 signing class. Like Smith-Njigba, he was also a 5-star prospect. Fleming starred at Catawissa (PA) Southern Columbia High School and was ranked the nation’s top receiver prospect for the cycle.

Ohio State is looking to return to the Big Ten Championship and College Football Playoff after missing out on both in 2021. The Buckeyes had won the Big Ten every season dating back to 2017 and made two consecutive playoff appearances before those streaks were snapped last season. Day told reporters before the win over Notre Dame that his team has something to prove in 2022.

“I think coming off of last year, there’s no big heads,” Day told reporters during his mid-week press conference “This team is hungry. This team has been hungry, it’s been gritty. We gotta go win this first game, and they know that. So, there’s no big heads on this team right now. We got a lot to prove.”

Read Also:   Previewing No. 2 Ohio State vs. No. 5 Notre Dame with Tim O'Malley of Irish Illustrated